Helicopters perform numerous vital functions on the battlefield, like heavy lift, abseiling, fast roping, medivac and airborne assault to tactical movement. They get into places that vehicles can’t resupply FOBs and get casualties back quickly within that “Golden Hour”

They are a useful asset to you as a soldier, the following section is designed to serve as a ready reckoner, to enable you to identify them and to know their capabilities as well as limitations. All the helicopters listed here can operate by day and night.

Apache is a four-blade, twin-engine attack helicopter designed to hunt and destroy tanks, it has a crew of two, with the pilot sitting behind and above the co-pilot/gunner. 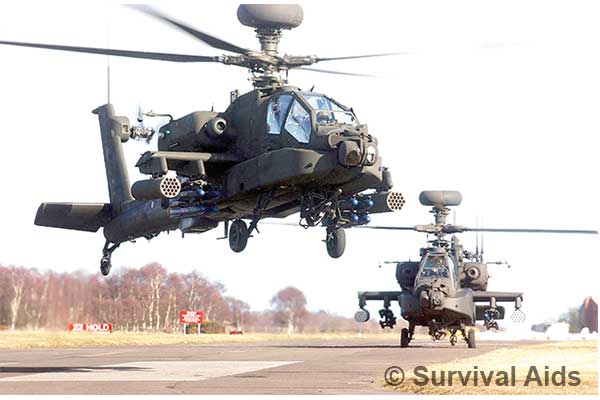 Apache can operate in all weathers, day or night and detect, classify and prioritise up to 256 potential targets in a matter of seconds. It carries a variety of weapons including rockets, Hellfire missiles and M230mm chain gun

The 30mm chain gun, which is carried between the main landing gear, is slaved to the gunner’s helmet, the gun tracks the head movements to point where he looks. 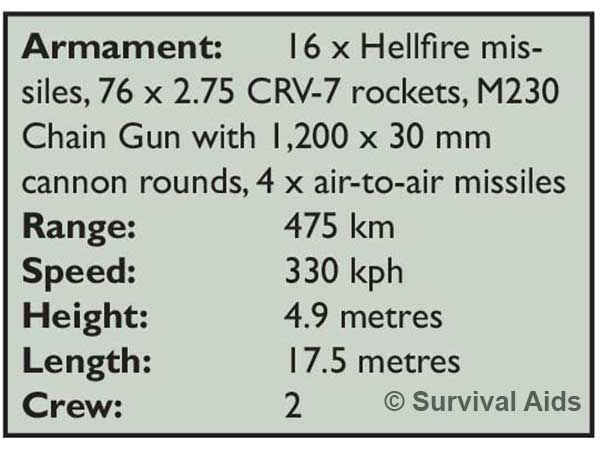 It has four hardpoints mounted on the side wing pylons, typically carrying a mixture of AGM-114 Hellfire and Hydra 70 rocket pods.

Both the cockpit and fuel tanks are armoured so that the aircraft will remain flyable even after receiving a burst from a DSHk?

Apache carries weapons on its two stub-wing pylons, which also have mounting points in an emergency can be used for harnessing personnel to the wings. Extra fuel tanks can be carried on the pylons to increase range.

Targeting information can be passed from one AH to others via the Fire Control Radar modem, allowing a group of Apaches to fire on targets detected by the FCR of one helicopter. Because the radome is mounted high above the heli, it can id targets and then pop down behind cover, and engage those targets from behind cover.

Having only one engine means it is not as powerful as others, but its lightweight chassis means it is extremely agile and has unparalleled visibility from the cockpit. 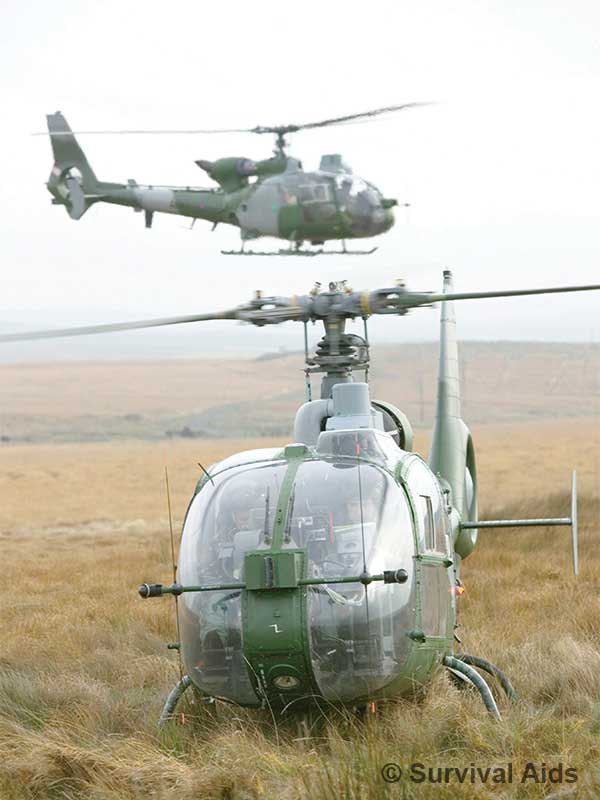 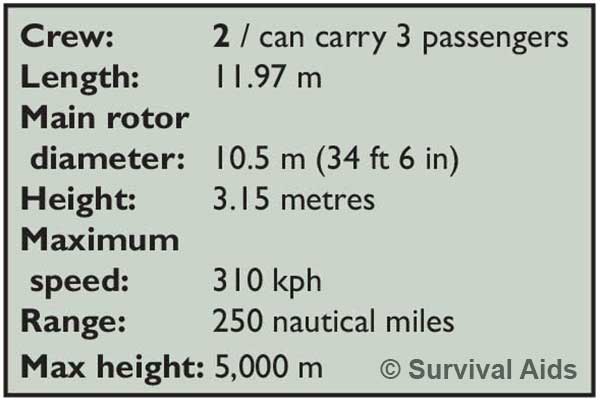 Puma is a battlefield helicopter that provides both troop and load movement.  The aircraft can carry up to 16 fully-equipped troops, or up to two tonnes of freight carried either internally or as an under-slung load. 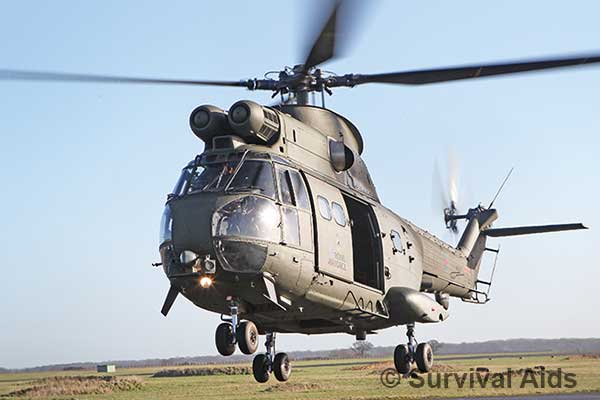 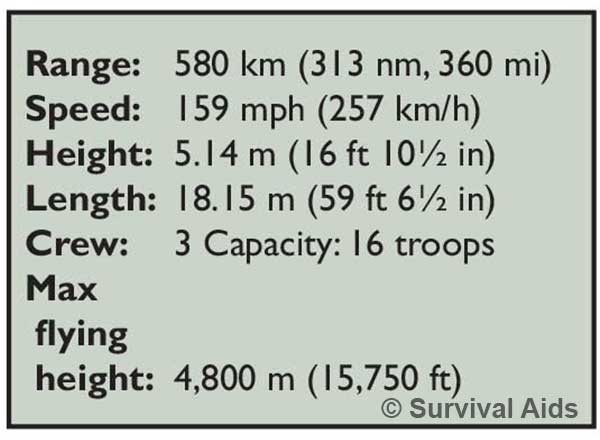 In the medivac role, it can carry up to six stretchers. The normal crew consists of two pilots or a pilot and a weapons systems officer for self-defence. The Puma also has a defensive-aids suite. 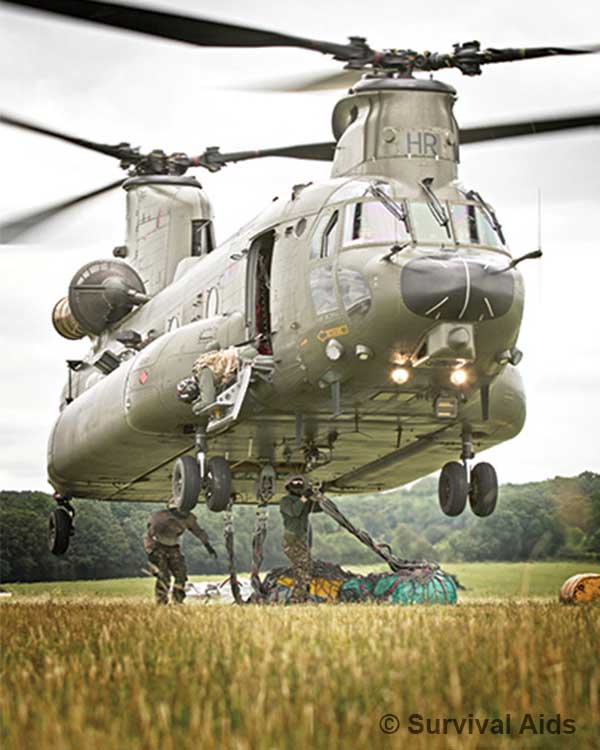 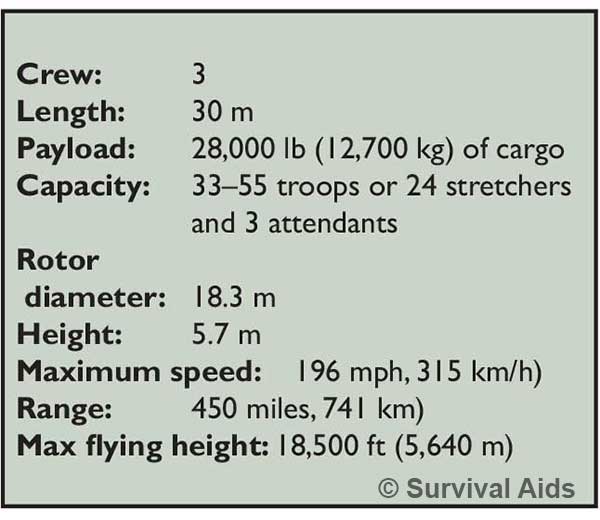 It has a wide loading ramp at the rear of the fuselage and three external-cargo hooks.

The CH47 is capable of supporting abseiling as well as fast roping platforms, both from the rear ramp as well as the side door.

Chinook can carry a diverse range of bulk cargo, either internally or under-slung, such as fuel pods, netted ammunition, artillery, Land Rovers or light-strike vehicles. 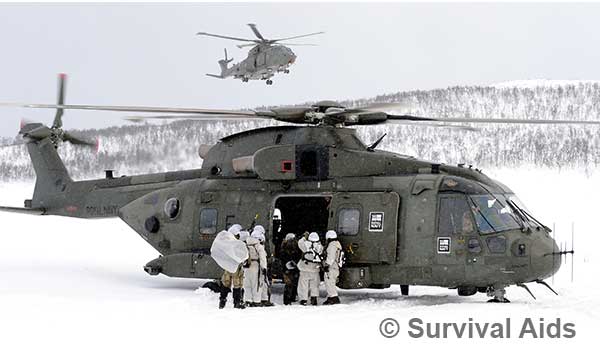 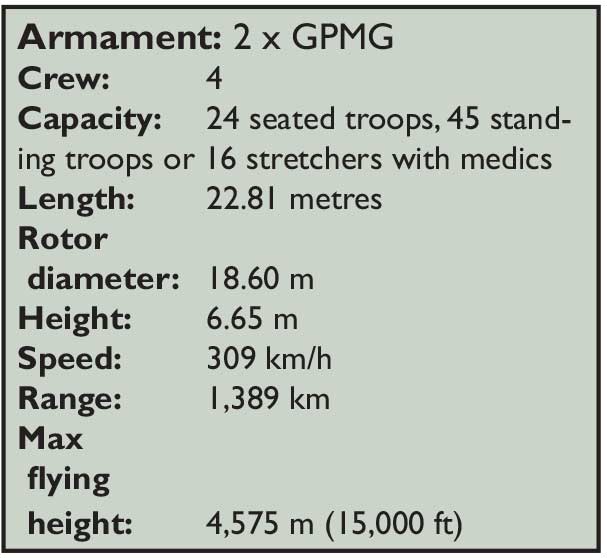 Merlin has one of the most comprehensive defensive aids suites fitted to any helicopter in the world. Laser warning receiver, missile approach warners and directional infrared countermeasures equipment.

Its computers enable precise position data received from GPS to accurately navigate anywhere in the world.

Merlin can be equipped with extra fuel tanks to extend it’s range, and is capable of air-to-air refuelling. An inbuilt vibration-damping system reduces the level of noise and vibration inside the cabin, which has reduced crew fatigue.

The Merlin is able to carry a diverse range of bulk cargo, either internally or under-slung. Cargo can include artillery, Land Rovers or light-strike vehicles and over five tonnes of freight. The spacious cabin can take 24 fully equipped combat troops or 16 stretchers for casualty evacuation. 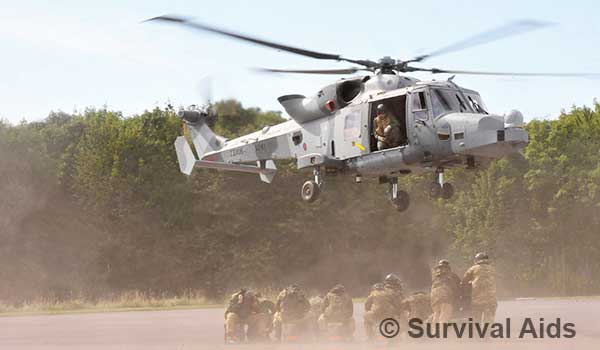 The Army variant of Wildcat will perform a range of tasks on the battlefield including reconnaissance, command and control, transportation of troops and material, and the provision of force protection. Equipped with Rolls-Royce engines it will be significantly more powerful than the current Lynx enabling it to operate in extreme hot conditions and high altitudes.