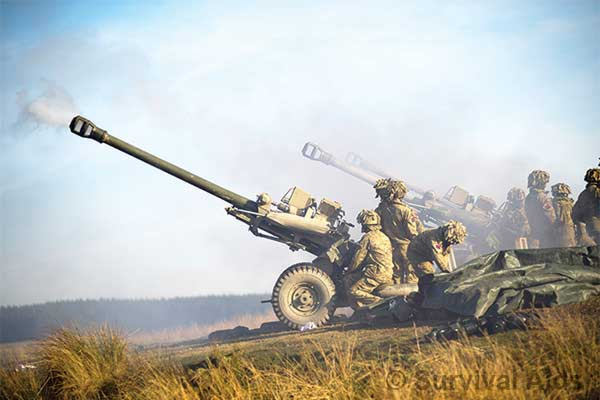 Indirect fire weapons are those weapons that engage a target indirectly i.e. the barrel of the weapon does not point directly at the target. As such these types of weapons are typically less accurate than direct-fire weapons and are therefore not used to engage point targets. Moreover, they are traditionally area-target weapons and operate over a greater range.

AS90 is a 155mm tracked, self-propelled gun, operated by The Royal Horse Artillery and Royal Artillery, it replaces the older 120mm Abbot and 155mm M109.

AS90 is equipped with autonomous navigation and gun-laying system (AGLS) based on the vehicles inertial navigation system, the dynamic reference unit (DRU). All main turret functions are controlled by the turret control computer (TCC).

The 105mm light gun is a robust, reliable go anywhere, air portable weapon which can be carried around the battlefield underslung on a Puma or Chinook. can be towed by a medium-weight vehicle (such as a Pinzgauer TUM/HD or Hagglund BV206 all-terrain vehicle) It has been in service with the Royal Artillery for 30 years. 105 mm light gun is used by both 7 RHA and 29 Cdo Field Artillery Regiments of the British Army.

L118 has been enhanced by an auto pointing system (APS) which acts as an inertial navigation system which enables it to be unhooked from the vehicle towing it and into action in 30 seconds.

New light gun ammunition is in development, with an increasingly lethal round and an extended range. It is armed with 2 x rocket pod containers, each containing 6 x rockets, these pods are machine reloaded which takes 20-40 minutes.

The launcher easily copes with the harsh environment and challenging terrain has been used to target enemy bunkers in southern Helmand, suited to destroying this type of enemy position and single or multiple rockets can be selected to fire. All twelve can be fired within 1 minute.

Starstreak can be shoulder-launched or mounted on an Alvis Stormer APC, which has an eight-round launcher and 12 further missiles carried inside the vehicle.

Starstreak has been designed to counter attacks by helicopters and low flying aircraft. The system deploys three dart type missiles with explosive warheads capable of multiple hits on the target.

The thermal sighting system (TSS) enables operation at night, as well as through cloud or in poor visibility.

An HVM detachment of four is carried in a stormer armoured vehicle. Inside the vehicle there are twelve ready-to-use missiles with a further eight stored inside as reloads.

Starstreak is a low-level close air-defence (CAD) system with a rapid engagement capacity developed and optimised to counter the attack helicopter threat.

Rapier field standard C (FSC) is a surface to air missile launcher capable of engaging supersonic, low level, highly manoeuvrable aircraft. It can be towed behind medium size vehicles and APCs and mounts eight missiles (able to fire two simultaneously).
Two warhead versions are in use -

Rapier is run by the Royal Artillery, it is air-portable by transport aircraft or helicopters, the system integrates with Starstreak air to provide a network-enabled capability.

The maximum detection range of the radar is in excess of 15km. An optional range of 32km is available.

The radar is equipped with an IFF (Identification Friend or Foe) system.

When the surveillance radar detects and acquires a target, the bearing data is downloaded to the tracking radar and the launcher, which then automatically align to the target bearing. The target is acquired on the optical tracking system. When the surveillance radar has confirmed that the target is hostile the missile is launched. The missile is guided towards the target at speed in excess of Mach 2.5 by passive infra-red line of sight and active command to radar line of sight. The automatic reaction time is less than 5s and a second target engagement takes less than 3s.